Whether you’re a beginner, an expert, or just wanting to try something new this isolation period, here are the eight precious exercises of Qi Gong to help loosen your mind and body in these times.

Excerpts taken from The Power of Ch’i by Geoff Pike.

We are ready to begin Pa Tuan Tsin. You have chosen the spot in which you feel most natural and where the air is at its best. You are dressed in loose-fitting, comfortable clothing with ample leg room, your footwear is light and flat bottomed, the sash around your waist is soft and not tied too tightly. You are stripped of metal accessories, your bladder and bowels are empty, you have eaten nothing for at least two hours and taken no alcohol for at least six. There is a pitcher of cool to warm boiled water or hot green tea nearby in case you need it. You remember that all inhalation and exhalation must always be through the nose, never through the mouth (unless exhalation is so instructed). All breathing should be concentrated on the slow, silent and deep. The words patience, discipline, fortitude and faith are firmly in mind.

Relax. Stand with your feet flat and arms loose at your side. Empty your lungs; inhale as slowly as you can while raising the hands (palms down) until the fingertips reach above the head (now palms up). Hold silent for a count of three. Exhale, reversing the inhale movement. When your arms are by your sides again, move them to intertwine your fingers, palms facing up. Bring your palms to your mouth, your elbows pointing upwards. To the count of three, reverse your palms facing down, and push your arms back down. Reset, and repeat eight times. 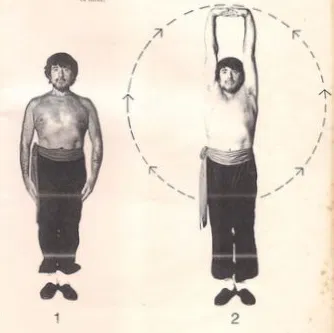 Reach behind with the left hand and firmly clasp the back of the thigh below the left bum cheek. Exhale fully. Form a ‘cup’ with the right hand hooked at the wrist. Inhale slowly and deeply while raising the cup to the lips, elbow inline with shoulder. Without pause, turn the cup outward and over, rise on your toes and continue inhaling until the right arm is ‘pressing the sky’. Hold for a count of three. Exhale slowly and steadily and reverse the action exactly. Complete four times with each arm. 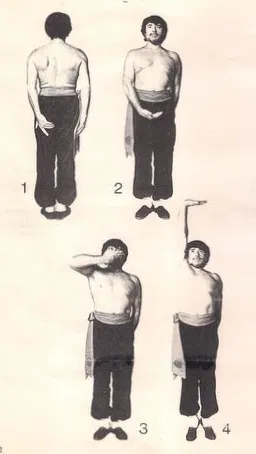 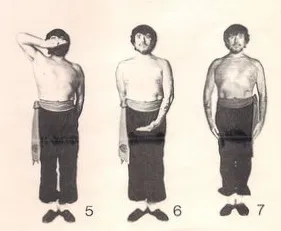 Inhale while raising your right arm so that it is level with your shoulder. Swing your arm across your body, feeling it as it moves across your chest, exhaling as you do so. Before your hand finishes travelling, bring your left arm up (the ‘bow’). Raise the forefinger of your left hand. Inhale slowly and extend your left hand, keeping your eyes focused in your fingertip. While you’re doing this, pull back your right arm as if drawing the bow. Pause for three counts, and extend all you can through the tip of your finger and arm. Exhale and complete the sequence in reverse. Swap arms by exhaling and swinging the two into opposite positions. Repeat four times on each side. 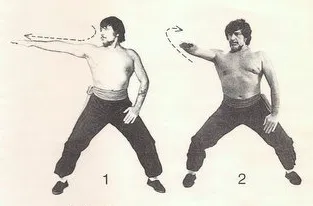 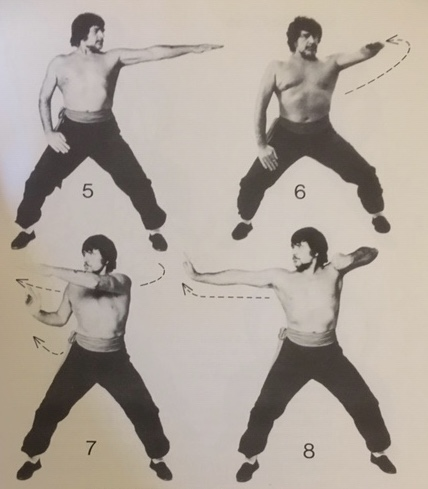 Begin in horse stance. Place hands on upper thighs with the fingers facing inwards. Slowly inhale, while bending the body backwards and to the left as far as you can. You should have fully inhaled by the time you’ve stretched as far as you can. Hold for a count of three, and try to push back a tiny bit further. Bring yourself upright while exhaling. Hold for a count of three. Repeat on the right side, four times on each side. 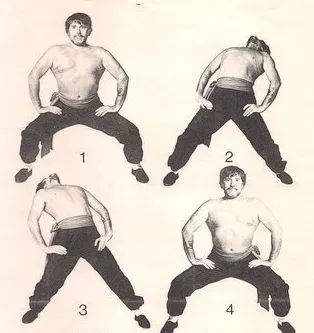 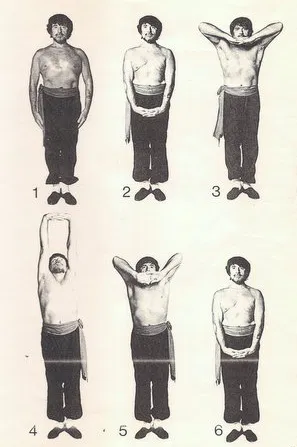 Entwine the fingers with the palms facing upwards. Inhale slowly, bringing the hands up level with the chin. Continue the upward press, careful not to break your grip as you push above your head. Follow the movement of your hands with your eyes until your hands reach as high as they can go. Hold for a count of three, trying to extend a tiny bit more. Exhale while reversing the movement. Press down for the count of three, repeat eight times. 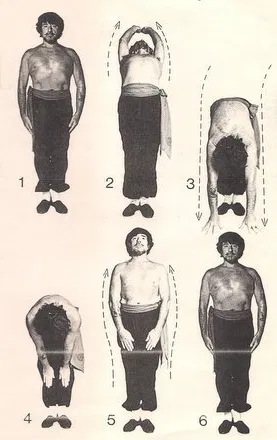 6. Touch the Sky, Press the Earth

Stand straight with your arms loosely at your side. Inhale slowly while raising your hands above your head and continuing a backwards bend as far as possible. Hold for a count of three. Exhale steadily while reversing the movement, pushing forward until your fingertips touch the ground as far ahead of your toes as possible. Inhale slowly to reset to standing position. Repeat eight times.

Stand straight with your arms loosely at your side. Inhale slowly while gradually rising onto your tiptoes, turning the head as far left as possible. Try not to move your shoulders or chest. Hold in this position for a count of three. Exhale and release to standing position. Complete again on the right. Repeat on each side four times. 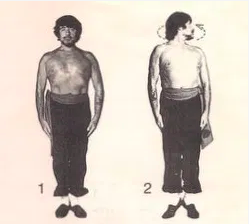 Start in horse stance. Inhale deeply while extending the right fist in a frontal punch. When the fist is fully extended, tense the full arm as if in a strike, and hold for the count of three. Slowly exhale as you reverse the movement, withdrawing the fist and resting it at your hip. Hold for a count of three. Repeat with each arm four times. Once done facing forward, repeat again by twisting into the ‘left bow’ position, punching four times into an imaginary target; four punches with each arm. Then, twist into the ‘right bow’ position and punch to the left, repeating twice. Close the horse stance, standing upright. Inhale. Exhale. Bow to the light that is in you. 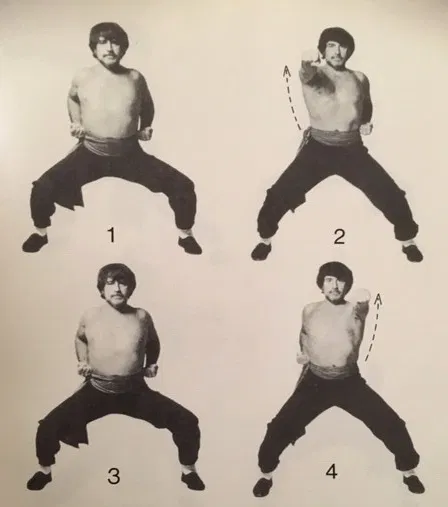 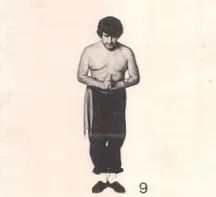